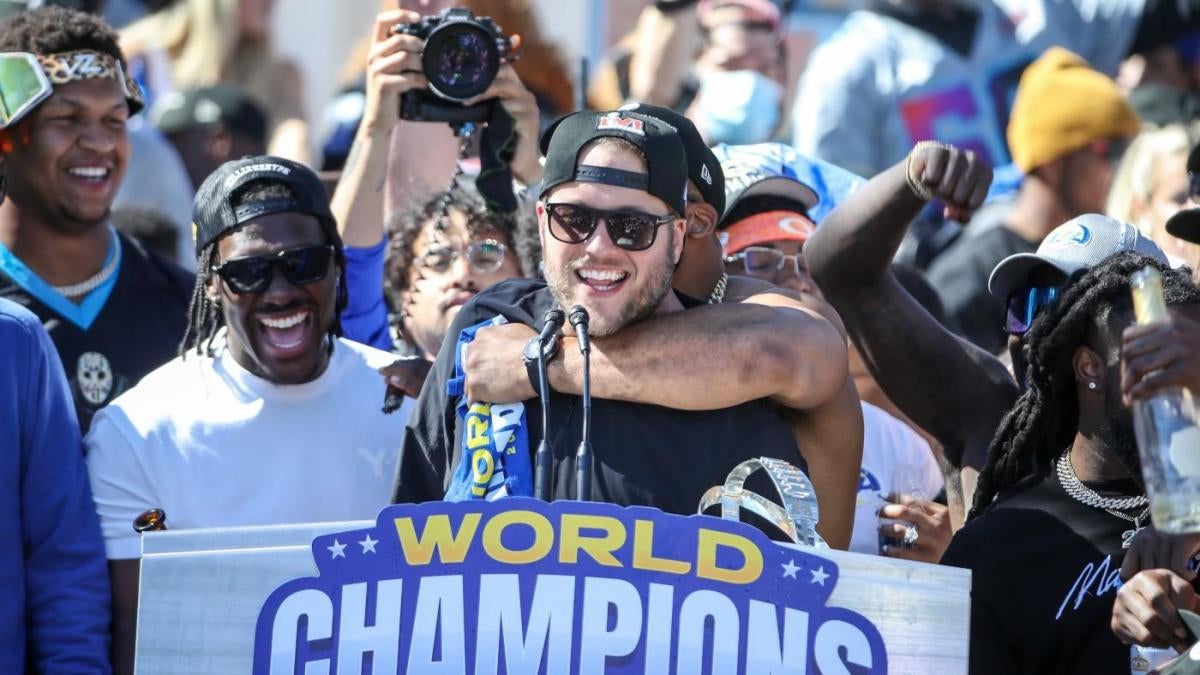 Rams’ Super Bowl parade gets wild, plus Carson Wentz landing spots and who Rams could play in 2022 NFL opener

Oklahoma quarterback Caleb Williams has been in the transfer portal for nearly four weeks without having made a decision yet. With several add/drop deadlines on the horizon throughout the schools, a choice should come soon.

Williams has some of the top programs in the country on the hook, as Oklahoma, USC, Wisconsin and LSU are among the teams reportedly battling for his services. After throwing for 1,912 yards, 21 touchdowns and four interceptions — plus compiling 442 yards rushing and five touchdowns on the ground —  in seven starts, his decision could swing College Football Playoff races in the coming years.

Here are pros and cons for Williams at each of his top reported choices as he narrows down his decision.

Pros: Since the day Williams entered the transfer portal, USC has been the obvious top choice because it would reconnect him with new Trojans coach Lincoln Riley. Williams picked Oklahoma to join Riley’s impressive lineage of quarterbacks; Baker Mayfield, Kyler Murray and Jalen Hurts, three of the NFL‘s 32 starting quarterbacks, played for Riley at Oklahoma. USC will also boast an impressive collection of skill talent thanks to one of the nation’s top transfer classes. More than anything, rejoining Riley means Williams would not have to learn a completely new system and playbook.

Cons: Williams picked Oklahoma because of Riley, so seeing his former head coach break promises and leave Williams in Norman could have soured the relationship between the pair. The Washington, D.C. native already traveled halfway across the country to play for the Sooners, so moving even farther west might be a problem. And while Riley is a quarterback guru who brought in a great deal of talent to L.A., there’s still an unknown aspect with so many new players who haven’t been coached by the staff or played together. There could be some growing pains before USC is ready-made to win.

Pros: The pieces around the passing game at Wisconsin are outstanding. The Badgers are best known for their physical offensive line development, and three players earned All-Big Ten honors up front in 2021. Running back Braelon Allen was otherworldly as a freshman and will compete for All-America consideration as a sophomore. Outside of Georgia, Wisconsin had perhaps the best defense in the nation. If the Badgers can figure out the passing game, they could quickly become a legitimate CFP contender.

Cons: Saying that Wisconsin struggles to produce NFL quarterbacks is an understatement. Only 12 have been drafted in program history, and seven of them were picked in rounds 10 or later back when the NFL Draft was much longer. Only one Badgers quarterback in the Super Bowl era has been picked earlier than round six — Russell Wilson, who was already a two-time All-ACC selection from NC State by the time he arrived for a gap year. Perhaps contributing to this trend is the fact that Wisconsin hasn’t produced a receiver selected in the first three rounds since 2006. Needless to say, Williams developing at Wisconsin would buck historical trends.

Pros: There aren’t many better places to build NFL Draft stock than the SEC, and LSU has all the pieces to do it. The last full-time starting quarterback at LSU to graduate was Joe Burrow, who developed into the Heisman winner and No. 1 overall pick. The Tigers rank No. 5 in 247Sports Talent Composite, so there would be plenty of pieces with which to work. Virtually every contributor at wide receiver is back, including future Sunday dude Kayshon Boutte.

Cons: The Tigers have been a disaster over the past two seasons, going 11-12 and earning their first losing season since 1999. The instability ultimately convinced incumbent Max Johnson to transfer despite solid numbers as a starter. New coach Brian Kelly should bring some stability to the program, but neither he, nor offensive coordinator Mike Denbrock, have produced a first-round pick at quarterback. Williams will instantly become the most popular player on campus, but the Tigers also have three other touted quarterbacks — Myles Brennan, Garrett Nussmeier and incoming freshman Walker Howard — who could quickly be breathing down Williams’ neck if he struggles.

Pros: Technically, the Sooners are still in the running for the talented quarterback that they reeled in as a high school recruit. While there are several moving pieces after Riley’s departure, Williams would still benefit from the bond he built with receivers like Marvin Mims. Despite the portal losses, Oklahoma remains one of the best-stocked offenses in college football.

Cons: In the most visible sense, Williams and Oklahoma seem to have moved on from each other. Just hours after Williams entered his name into the transfer portal, OU flipped former UCF transfer Dillon Gabriel from UCLA. Additionally, the Oklahoma that Williams starred at and the one he would play at in 2022 are very different. Riley is gone, as are four of the top five leading receivers. Even if Williams returns, there’s no guarantee that the OU offense could replicate its 2021 success.