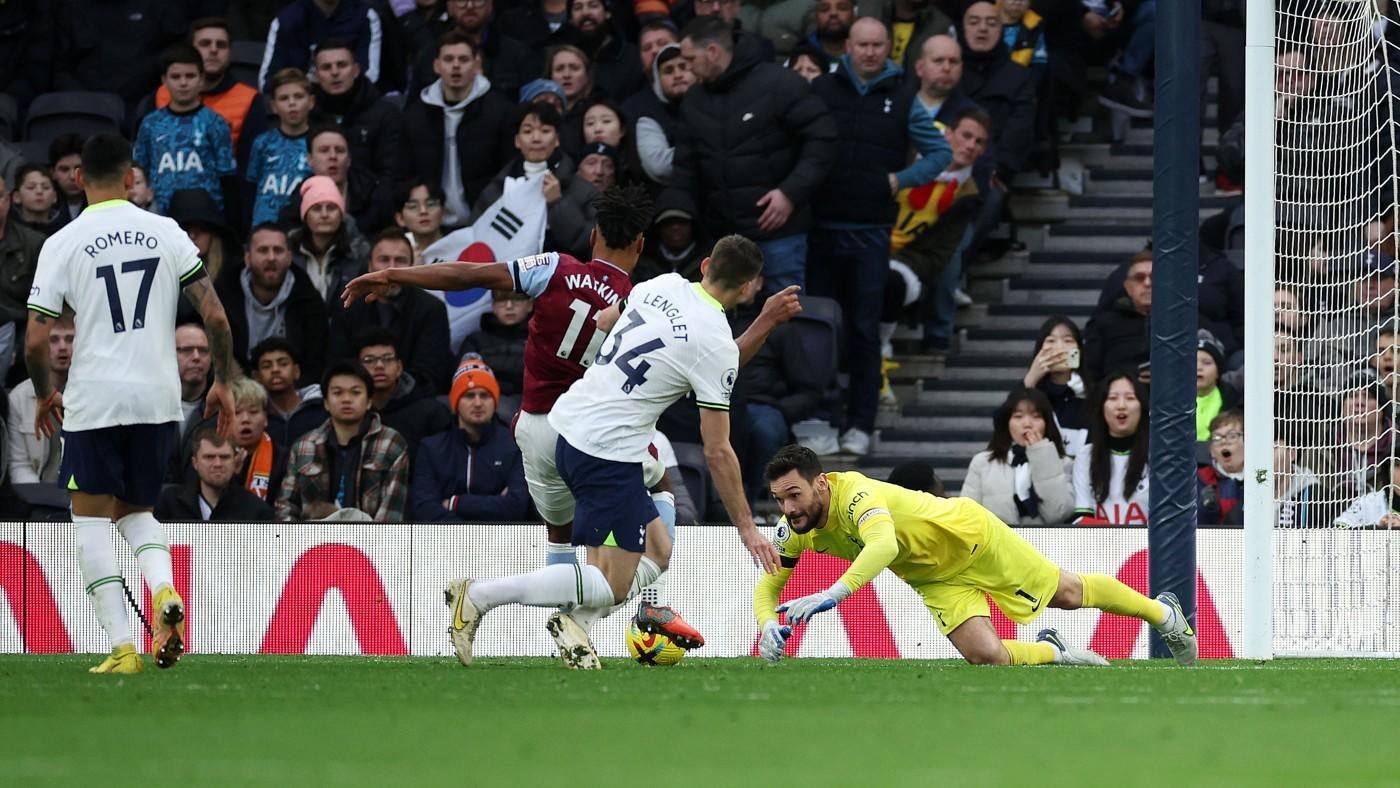 LONDON — As their rivals surge up the table, Tottenham are mired in the trenches. A 2-0 defeat to Aston Villa on sunday was the inevitable end point of weeks in which they have scraped by, bailed themselves out and roared back from the doldrums. If you keep stepping into the mud, you might eventually get stuck.

Meek off the ball, utterly lacking in ideas with it: this was as bad as Tottenham have been since they appointed Antonio Conte. Supporters in the South Stand renewed their calls for chairman Daniel Levy to go. Spurs’ head coach might be relieved his boss is there to take the flack. In their last 10 Premier League games, 13 points have been accrued, a streak that has taken them from a point off first to two off fourth. It has been thrilling, riven with comebacks and late goals, but it has been a while since Conte’s side have been effective.

Since the start of October, they have had a goal difference of minus three, have registered slightly fewer non-penalty expected goals (xG) than they have given up and have allowed opponents exactly as many shots as the 134 they have taken. In almost every respect they are playing like a team that belongs firmly in the middle of the Premier League pack. They are nothing like the side who pipped Arsenal to fourth last season. Conte insists they shouldn’t be.

“I continue to repeat that last season we made a miracle,” said Conte of his side’s late-season rally to reach the Champions League. “It happened why? Because we played only one competition, we played with 12 or 13 players that didn’t have injuries. We played with the best players every game. Don’t forget that three games to go Arsenal was four points up, that we finished 20 points less than Manchester City.

“I remember in the summer many people talked about Tottenham as title contenders. From my experience, it was a bit crazy.”

They aren’t talking about Tottenham as title contenders now. Ahead of them Manchester United and Liverpool seem reinvigorated by new ideas and impactful signings. Spurs began this year where they have been since Mauricio Pochettino left: waiting for Harry Kane and Heung-min Son to do something. Between them, they registered just four shots in a game where Aston Villa challenged their hosts to break them down. That quartet of efforts were worth a combined 0.33 xG, the other 14 players in Tottenham white rustled up just two shots.

For the first hour, this was a largely impressive defensive display from the visitors, though the criticism one might lay at Unai Emery’s door is that they paid this limp approximation of Tottenham altogether too much respect. The game was there to be won earlier as Ollie Watkins probed with purpose, added by the direct running of Leon Bailey yet as the first half wore on both John McGinn and Emiliano Buendia dropped so far back as to form a back six. It certainly allowed them to repel crosses into the box but adding more bodies to the defensive line did increase the opportunities for one of them to make a decisive error. It seemed that Ashley Young would do so when he played Ivan Perisic onside to win a ball over the top.

Perisic rolled away from the onrushing Robin Olsen, clipping a cross to the back post, where Kane was well challenged by Ezri Konsa. Ultimately the Spurs striker could only direct a rather tame header at goal, allowing Young to make amends with a flick to safety. That was not far off the sum total of Tottenham’s attacking threat as they cruised inexorably towards a 10th straight game in which they conceded the first goal. There are mitigating factors in the absence of Richarlison, Lucas Moura and Dejan Kulusevski but only the latter regularly shows the guile to open up low blocks.

Conte might point to the lack of options within his squad but is it really beyond the wit of a manager who turned Marcos Alonso and Victor Moses into the Premier League’s most potent attacking weapons to get more out of what he has? He would seem to think so.

With Boubacar Kamara glued to Kane’s hip, there was precious little opportunity for the England captain to turn and play a through ball from deep, Tottenham’s most reliable route to goal was blocked up. What should be most concerning for the Spurs hierarchy is how  manager and players never really adapted.

Villa did and the greater thrust they took into the second half was enough to snatch them the lead with a goal typified by the passivity Conte was appointed to root out of this ground. Hugo Lloris spilled Douglas Luiz’s bouncing hit and hope. Watkins stole in ahead of the flat-footed Clement Lenglet whilst all the while Ben Davies and Ivan Perisic were disinterested onlookers. Had the former scrambled back quickly enough he would have reached the goal line before Emiliano Buendia’s shot had rolled into the bottom corner.

This time there was no great roar from the wounded beast. A few tame swipes never tested Villa, who fancied more. A strong block from Matt Doherty denied Watkins the goal his industry so thoroughly merited. It was a rare example of intensity from Spurs in the closing stages. Soon after Douglas Luiz could ramble through what ought to have been the opposition midfield, giving to John McGinn and going without an ounce of pressure on him, a flick of his right boot directing a lofted pass beyond Lloris.

The only fireworks that were to come from a Tottenham employee were reserved for the auditorium, where Conte offered a robust warning for supporters, refusing to sell them “illusions and dreams”. A time like this was coming for Spurs.

Dwyane Wade, who was part of the "Redeem team", sees his son, Zaire Wade declare for DR Congo Instead of Team USA