After the preliminary, quarterfinal, and semifinal rounds of the 2023 World Junior Championship (WJC), the starters for the bronze and gold medal games included three goaltenders that were undrafted (Thomas Milic, Tomas Suchanek, Trey Augustine) and one that was a seventh-round pick (Carl Lindbom). No first-round picks like Jesper Wallstedt or Jaroslav Askarov were to be found. And while Augustine will likely be selected in the upcoming 2023 NHL Draft, Suchanek, and Milic – the two that are playing in the gold medal match – have been passed over multiple times already.

While Milic and Suchanek have attended NHL rookie and training camps in the past (Milic with the Minnesota Wild and Seattle Kraken and Suchanek with the Buffalo Sabres), they are still free agents without an NHL contract. Something tells me that won’t be the case for very much longer. With scouts galore attending the tournament and watching their own prospects, it was impossible not to notice these two netminders and what they did to get their nations to junior hockey’s biggest and brightest stage.

The Vancouver Canucks undoubtedly had scouts at every Team Sweden game watching Jonathan Lekkerimaki and Elias Pettersson, so they got to see firsthand what Suchanek and Milic can do. Unfortunately, so did 31 other franchises. Regardless, they should still get on the phone with one of their agents to see if an entry-level deal can be struck. The Canucks don’t have the goaltending prospect depth they once did, so adding one of these 2023 World Juniors standouts would go a long way in extending it beyond the likes of Arturs Silovs and Aku Koskenvuo.

Milic Showing Everyone Why He Should Have Been Drafted in 2022

Despite a strong showing in the Western Hockey League (WHL) with the Seattle Thunderbirds where he led his team to the WHL Final, Milic still found himself on the outside looking in when it came to the 2022 Draft. Passed over by 32 teams for the second straight year and cut from yet another NHL training camp shortly after, he again went to work to prove those decisions were a mistake.

On a team primed to contend for the Memorial Cup later this year, Milic has improved upon his numbers from 2021-22 putting together an 11-2-1 record along with a 2.35 goals-against average (GAA) and .919 save percentage (SV%). Those stats combined with his impressive run in the playoffs were enough to catch the attention of the Team Canada brass, who named him to their 2023 WJC final roster alongside Ben Gaudreau of the Sarnia Sting.

In what has become familiar territory for Milic, he was not head coach Dennis Williams’ first choice as the starting goaltender. That was Gaudreau, who started the first – and only – game Team Canada dropped at the 2023 WJC. Since allowing five goals to Czechia in the opener of the preliminary round, Gaudreau sat second-fiddle to Milic for all but one game.

Like Devon Levi before him, Milic rose to the occasion and took the reins as Canada’s undisputed starting goaltender. While his overall stats weren’t nearly as stingy as his 2021 counterpart, he was dominant when his team needed him the most. The biggest example was against the high-powered offence of Team USA in the semifinals where he stopped 43 of 45 shots and put on an absolute goaltending clinic in the second period with his team up 4-2. In a tournament headlined by the brilliance of Connor Bedard, that game was all Milic, as if not for him, they probably would have played for bronze rather than gold. 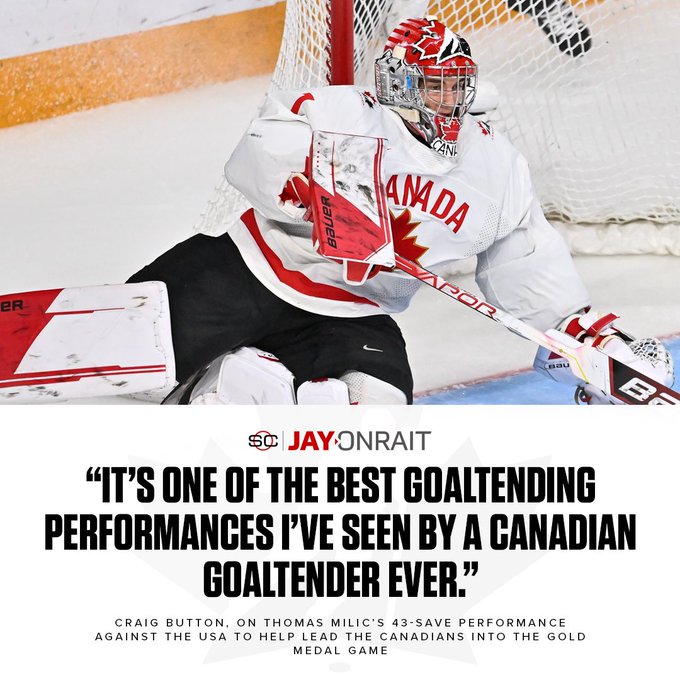 All of this is to say that the Canucks would be doing a disservice to their prospect pool if they did not at least look into signing Milic to an entry-level contract. After dealing away a former Team Canada goaltender in Mikey DiPietro – who unfortunately got flack for his performance at the 2019 WJC, despite putting up a 1.23 GAA and .952 SV% – their goaltending depth needs a bit of a boost. I am not saying that Milic will become a starter in the NHL, but his athleticism, work ethic, and ability to make the big save are all things needed to succeed at the highest level. Basically, what I am saying is, I would not put it past him.

In the end, the Canucks should bring the Coquitlam native home to British Columbia. If all goes to plan, Canucks fans will be cheering him on at the Memorial Cup in Kamloops later this year.

If the Canucks can’t find a way to snag Milic, they should go after Suchanek. Unlike Milic, he was his country’s unquestioned starter right from the beginning of the tournament. Capable of stealing games and surprisingly adding to the offence (he finished with a record-breaking four assists), he was one of the reasons Czechia shed the underdog label and became a contender for the gold medal at this year’s WJC. Led by his nearly flawless goaltending performance where he put up a minuscule 1.30 GAA and equally impressive .938 SV% (and of course, the five-man defensive unit in front of him), they surprised everyone and will win a medal for the first time since 2001.

Suchanek’s rise started at the rescheduled 2022 World Juniors in August where he stole the show in a 4-2 upset over Team USA in the quarterfinals that knocked the supposed favorites out of the tournament. He made 28 saves in that game and won the player of the game award for his efforts. They ended up losing to Canada in the semis and surrendered the bronze medal to Sweden, but he was not about to let those games define his WJC career.

No, Suchanek will now go down as the goaltender to pace his country to a medal for the first time since Tomáš Duba did it with a stellar 1.14 GAA, .947 SV%, and two shutouts. At 6-foot-2, 170 pounds, he definitely has the size and athleticism to compete in the NHL. He also has that rare puck-playing ability that has gone the way of the dodo bird, especially now that Mike Smith has retired. The Canucks have not had one of those netminders since Johan Hedberg was the backup to Dan Cloutier in 2003-04.

Again, I am not saying that Suchanek will become a starter or even a backup in the NHL, but his performance at the WJC this year certainly has turned some heads. As such, he would be an intriguing addition to the Canucks’ goaltending prospect pool.

The starting goaltenders for the gold and silver medalists at the 2023 WJC will be signing NHL contracts in the near future. There’s almost no doubt about that. With the Canucks’ shallow goaltending pool and the likes of Ian Clark to mentor whatever goaltender enters the system, it’s always worth adding more students to his school. Of the two, Suchanek has the size he usually looks for, so they might be more inclined to go with him. Having said that, Milic has also stood out enough on the big stage of the WHL Playoffs and World Juniors to be considered too, despite being two inches shorter. In the end, the Canucks can’t go wrong signing one of these 2023 WJC standouts. With any luck, they will get an All-Star goaltender to follow Thatcher Demko when he inevitably moves on.

Matthew Zator is the assistant managing editor at THW and a writer who lives and breathes Vancouver Canucks hockey, the NHL Draft, and prospects in general. He loves talking about young players and their potential. Matthew is a must-read for Canucks fans and fans of the NHL Draft and its prospects. For interview requests or content information, you can follow Matthew through his social media accounts which are listed under his photo at the conclusion of articles like this one about Tyler Motte.