Once again, the Winnipeg Jets have been disrespected and overlooked for essentially being a small market team. The NHL Broadcasters Association published its Coach of the Year vote at the halfway point of the season, and somehow Rick Bowness was not in their top 5. Jim Montgomery of the Boston Bruins was the runaway leader in voting, and with good reason. But I question Pete DeBoer (second) of the Dallas Stars and Rod Brind’Amour (fourth) of the Carolina Hurricanes being ahead of Bowness. The Jets have a better record than the Hurricanes and beat them 4-1 in their only meeting; while the Stars are tied with them, have played one more game, dropped two of three to the Jets, and have identical winning percentages as of Jan. 14, 2022.

The absence of Bowness suggests this national media group views the Jets in one of three veins. The local market is unduly enamoured and biased toward them and overvalued their turnaround this season. The national media views the team’s failures last season as an anomaly based on the roster and some unforeseen circumstances. Finally, Winnipeg is a small market in the middle of the continent that no one in the eastern time zone pays attention to.

The Manitoba Market Knows the Job Bowness Has Done

The 2021-22 version of the Jets turned out to be a mess. They unravelled in the last half of the season, and many were calling for wide-sweeping changes to the roster. Whether they unsuccessfully tried to move some players in the offseason or not, the reality is the only significant change was the hiring of Bowness and his staff. 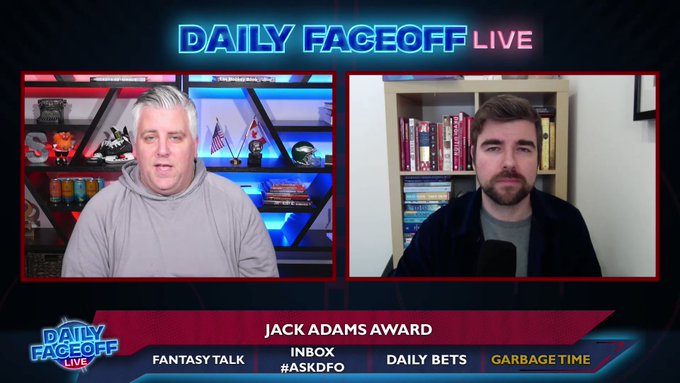 General manager Kevin Cheveldayoff called the hiring a “seismic change” for the club, and while many scoffed at the rhetoric, it turns out he may have been right. Behind the scenes, the Jets had a locker room full of discontent, with many of the team’s top contributors expressing their frustrations about player accountability to the media.

“I look back and I’m mad at myself for underestimating a coach that is known – especially in recent times – for galvanizing hockey teams. I don’t think the Stars would have made it to the Stanley Cup final in 2020 without Bowness at the helm. I see much the same happening this year in Winnipeg. Bowness has taken a roster rife with talent but short on purpose and turned it into a formidable contender.”

What’s changed on the ice for the Jets? Currently, they have 57 points, tied with the Dallas Stars for first place in the Central Division and one point behind the Vegas Golden Knights for the best record in the Western Conference. After 43 games last season, they had 45 points, found themselves in sixth place in their division, and were out of a playoff spot. The players have bought into Bowness’ new systems and appreciate his honesty. On this team, the players that play well get to play. Those that don’t, get to spend some time in the press box.

The Jets have three players scoring at more than a point-per-game clip in Kyle Connor, Pierre-Luc Dubois, and Josh Morrissey, and Mark Scheifele is on pace to score 50 goals. Bowness has also vastly improved the team’s defensive structure. He has Scheifele playing the best defensive hockey of his career and simultaneously on pace for a career-high in goals. Additionally, Morrissey is on pace to put up 90 points this season and is in the conversation for the Norris Trophy as the NHL’s best defenseman.

Last season as a team, the Jets allowed three goals more than they scored. This season they are on pace to score 62 more goals than they concede. That’s significant. The biggest difference has been in the penalty kill as they went from fourth worst in the NHL to fourth best, improving upon their 75 percent kill rate in 2021-22 to 83.5 percent this season.

To suggest the media markets outside Manitoba saw the Jets’ miserable season last year as a “one-off” by a talent-laden roster that would return for a playoff run would be fake news. Almost everyone wrote this team off for the 2022-23 season, with most paid prognosticators predicting they would finish on the bubble or outside the playoffs, and some had them as low as seventh in their division.

Related: Jets Are Being Misrepresented & Overlooked by the Media

After 43 games, only the Boston Bruins have more wins than the Jets’ 28. They have 32. The Golden Knights also have 28, and the rest of the NHL has fewer wins. With that, here’s a prime example of the lack of respect the Jets get from the media. On Jan. 11, 2022, thegameday.com released predictions of who would win the Stanley Cup with betting information courtesy of Caesars Sportsbook. The Jets do not appear in the top 13 teams. On that list, five teams out of the Western Conference have worse records than them, yet have better odds at winning the Cup.

The Jets Are Forgotten Because of the Market Size

The media has made it clear they do not believe in the Jets. But is it an oversight based on geography? The NHL Broadcasters Association rejected Bowness as a top candidate for the Jack Adams Award, while the Jets are broadcast only on local television for those who subscribe to TSN and live in the Manitoba region. Otherwise, the only national coverage the Jets get is when they take on big market clubs on a Wednesday or Saturday.

It’s hard to believe in 2023, anyone or anything can fly under the radar, but it could be the case here. Being the smallest market in the NHL also makes it easy for media outlets to gloss over the Jets, focusing on the big markets teams in which more attention and revenue are available.

Montgomery coaches in Boston, DeBoer in Dallas, Brind’Amour in Carolina, Bruce Cassidy in Vegas, and Lindy Ruff is behind the bench for the New Jersey Devils. All had considerably more votes than Bowness. Three teams are on the east coast, one is a significant market in Texas, and the other features the glitter and money of Las Vegas. Not to say these coaches don’t deserve some recognition, just not more than Bowness.

The Winnipeg Jets are the real deal. Nasty top-6. Defencemen that can defend and produce offence. Rockstar goalie. Rick Bowness should be right in the mix for coach of the year at this point.

Bowness has done an incredible job with the Jets. Even the most positive Jets supporter would say the turnaround has been better than expected. He has transformed the Jets into one of the stingiest defensive teams in the entire league and has proven to everyone that his squad can play with any team in the NHL. Being a single point from the top of the Western Conference should put them back in the conversation for a long playoff run and Stanley Cup contenders. But it hasn’t happened. They were in those very conversations last season with virtually the same roster. In fact, they are exactly where the media thought they would be last season. The only change is their coach, and that defines the Jack Adams Award to a tee.

Keith Forsyth is a freelance writer and sports junkie from rural Manitoba who is covering the Winnipeg Jets for The Hockey Writers.  Keith loves all sports and is a huge fan of the NFL (Skol Vikings… if you know, you know) and the Montreal Expos (they’re coming back… you watch!). He recently retired from the education world teaching high school, where his greatest passion was coaching young athletes.  He brings that same logical, behind the bench type of approach to you as he delivers an insightful look into the NHL and specifically the Jets.  For interview requests or content info, follow Keith on Twitter or his social media accounts.  They appear under his photo on articles like this one.

Flames’ Treliving Has Missed on Recent Big Contracts Handed Out