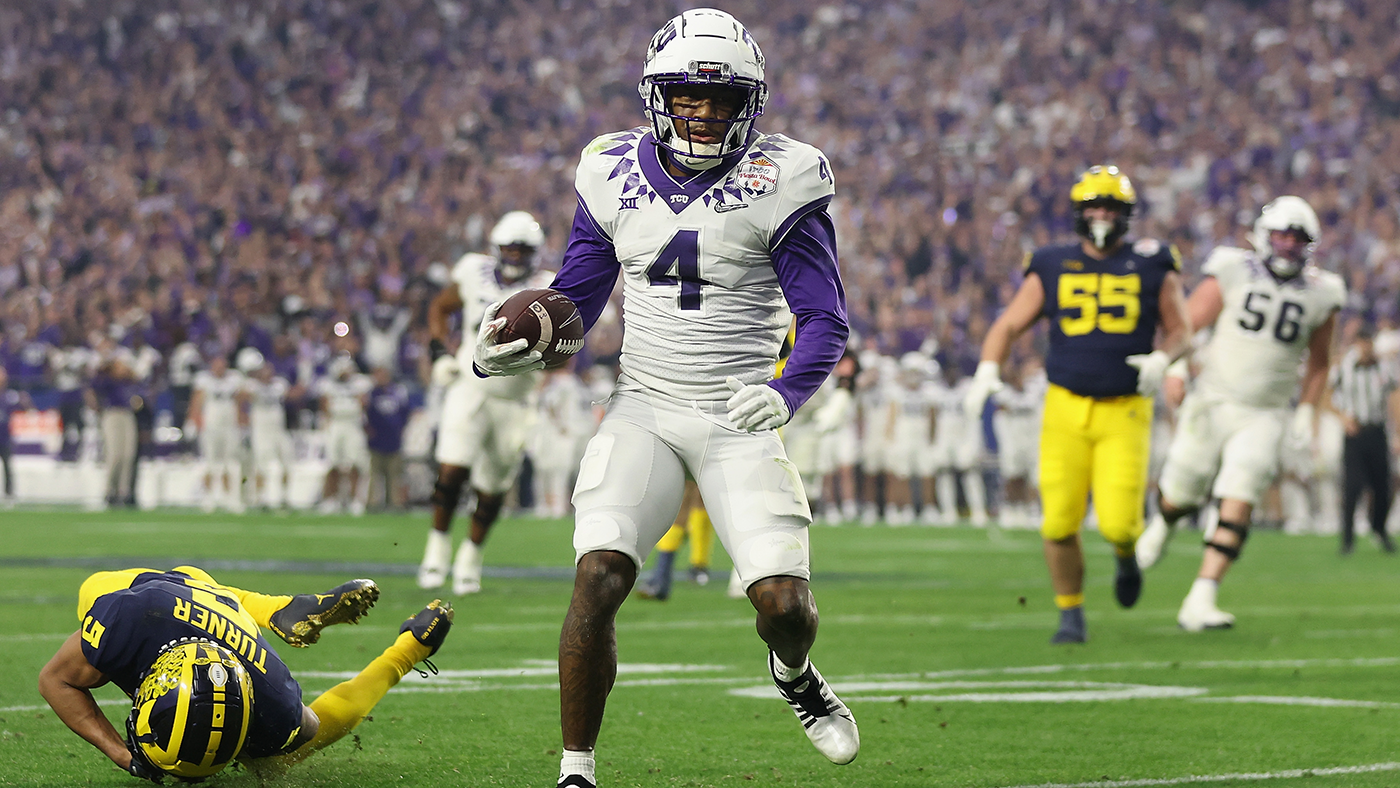 GLENDALE, Ariz. — Try to find a turning point. You can’t. No way. Not when the College Football Playoff semifinal at the Fiesta Bowl saw two team combine for 12 touchdowns and a CFP regulation record 96 points.

Not even when two Michigan passes were intercepted and taken back for touchdowns. Not when TCU lost its leading rusher. Certainly not when the best Michigan team in maybe forever had half a hundred hung on them.

In the end, the undefeated No. 2 Wolverines — having won 13 games for the first time ever — had that look of a cartoon character who had just been hit in the face with a frying pan.

The strange thing? It was TCU swinging the cookware. Little ol’ TCU, the small private school from the west side of the Metroplex.

TCU, which last year at this time was figuring out its future after changing coaches in the middle of a losing season.

TCU, on its fifth conference since 1994 and only third team in history to go from a losing season to the BCS/CFP.

TCU, from the much maligned Big 12, which enjoyed its first CFP in the nine-year history of the enterprise.

TCU, now about to play for a national championship 84 years after it won its last.

But a turning point? Well, maybe there was one; it just wasn’t on the field Saturday. TCU players and coaches proved that in the aftermath of the biggest upset in CFP history, 51-45 over mighty Michigan as eight-point underdogs.

There was TCU linebacker Johnny Hodges laying it out for all the world. Hodges was just glad to be playing football anywhere. A year ago, he was transferring from Navy and having a hard time imagining himself in the Power Five. On Saturday, he had the receipts from the program with the most wins in the sport’s history.

“[We were] passing around clips,” Hodges said of the (shall-we-say) confident Wolverines in the run up to the game.

“Just they’re more physical than us,” Hodges described the slights. “They were going to run all over us. They didn’t know what conference we were in.”

Yeah, there was that. Lots of it. It seemed there were more Michigan players cutting up doing imitations of their coach, Jim Harbaugh, during Thursday’s media day than were taking questions about the game. This would be different, they thought, than that blowout loss to Georgia last year in CFP.

TCU saw it all. Then it swung that frying pan.

This is a team that continually stuck its chin out in a series of heavyweight fights. Nobody as of yet has connected with a knockout blow.

“Teams that play for a national championship,” the coach added, “typically aren’t picked seventh in their conference.”

TCU has been playing in shootouts all season but nothing like this one. This was different, and it was almost like it had no form. Look, the no-respect card has been played since Rutgers laid it on Princeton (6-4!) in the first college game ever played. This time, Michigan was an eight-point favorite. Whatever the result, TCU wasn’t going to be intimidated.

It’s hard to say that when Michigan ran up the most points this season on TCU. But the Frogs put up more points on the Wolverines than any other team in three years.

The difference? Well, you can talk about those two pick sixes thrown by Michigan QB J.J. McCarthy. But the sophomore almost put the Wolverines on his back throwing for 194 yards and two scores in the second half.

You can credit Duggan and his four total touchdowns (two rushing, two passing), but the Heisman Trophy finalist also threw two picks and wasn’t his usual efficient self (14 of 29 passing).

In the end, it seemed like the two QBs were dueling with pistols at 20 paces. Not all of the projectiles found their marks, but damn was it was entertaining. At one point between the third and fourth quarters, the teams combined for 58 points in an 8.5-minute span. Do the math. That’s a point every 8.7 seconds.

“When we could get them tired, when we got some first downs and we could play with pace, they were a different defense,” TCU offensive coordinator Garrett Riley said.

Yes, one with their tongues dragging. In the end, maybe this was a Big 12-like game in which the Wolverines didn’t feel comfortable.

“I couldn’t see that we’d let a team rush for 244 on us [actually 263 yards],” Michigan defensive tackle Mazi Smith said. “We know how to win games. You win games by stopping the run. We know what to do. Kind of surprised we didn’t do it.”

A converted linebacker, Michigan’s Kalel Mullings sat by his locker in his team’s somber locker room. It was not until November that he switched to running back for depth purposes. In the Ohio State game, he was inserted and threw a funky option pass for 15 yards.

Against TCU in the first half, he fumbled a hand-off into the end zone from 1 yard out. That came one play after McCarthy had connected with wide receiver Roman Wilson what seemed to be a 50-yard touchdown. (It was overturned on review.) Mullings’ fumble was one of three turnovers by Michigan, which had committed only seven all season entering the game.

“It’s something we weren’t really used to,” Mullings said. “Normally, we’re the ones dictating the games.”

As the clock wound down, the fleet Frogs morphed into something new. They lined up and muscled up with 3:18 left, bleeding time off the clock. The Wolverines got the ball back with 52 seconds left.

The final, desperate gasp came when — with the game on the line at fourth-and-10 from the Michigan 25 — McCarthy somehow wasn’t ready for the snap. The release from All-American center Olu Oluwatimi, playing on the two-time offensive line of the year, clanged off McCarthy’s knee only to be picked up by Edwards, who completed a desperate pass to tight end Colston Loveland for a 1-yard loss.

It was over. Confetti. A purple reign.

Dykes knows he is now a marked man, at least in the local Starbucks where he wasn’t recognized until recently. As a joke now, when a barista asks for his name, he replies, “Bob.”

It has never bothered him. Why should anything bother him now?

“At some point, you gotta quit listening to what everybody says,” Dykes remarked Saturday night.